The Navy must be a wonderful institution.

It produces such a modest, shrinking type man... 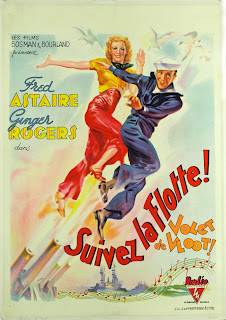 As you can see by the poster, this film features the great Fred Astaire and Ginger Rogers. It's one of their few films where they're cast as the secondary characters. If you ask my sister, those are the best - and she may be right. In their supporting roles, Fred and Ginger get a chance to shine without having to bicker, they get to have fun, crack jokes, steal scenes, and be adorable without having to go through all of the heartache and frustration of their mixed up romances as lead characters. 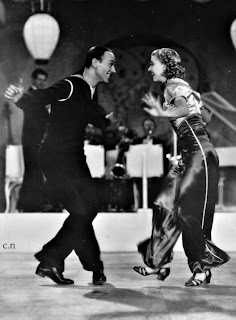 I'm going to steal the plot summary from IMDb: When the fleet puts in at San Francisco, sailor Bake Baker (Astaire) tries to rekindle the flame with his old dancing partner, Sherry Martin (Rogers), while Bake's buddy Bilge Smith (Randolph Scott) romances Sherry's sister Connie (Harriet Hilliard). But it's not all smooth sailing: Bake has a habit of losing Sherry's jobs for her; and despite Connie's dreams, Bilge is not ready to settle down. 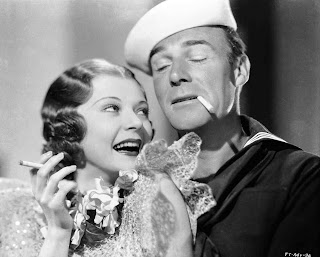 So, there you have it. As far as trivia goes, I've read that Irene Dunne was originally intended for the role of Connie but was unavailable at the time. It's an interesting fact considering Dunne was cast opposite Scott in Fred and Ginger's other supporting role film a year prior, Roberta. Follow the Fleet also includes a young and pretty Lucille Ball. I believe this was when she was still in Ginger Rogers' mother's school for aspiring actresses. A sharp eye will notice a young Betty Grable as a singer in "Let Yourself Go." There's a bugle call gag in this movie that also shows up in The Gay Divorcee and Roberta. I'm not sure where this gag originated. Do any of you know? This movie is also notable for being the only one in the Fred and Ginger series where the two characters are, throughout the film, working class characters. They don't hobnob with high society, fly down to Italy for the weekend. Ginger isn't a model for a couture dressmaker. And Fred isn't a well-known dancer. Their previous gig as a dancing team featuring "High Class Patter and Genteel Dancing" is a bit of a joke. 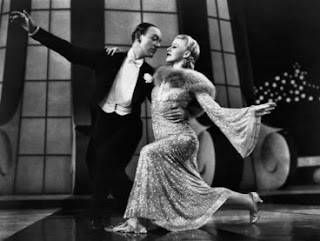 The movie features some spectacular dance scenes: there's the somber "Let's Face the Music and Dance," which is the only part of the movie where Fred appears in his typical hat and tails. This is the dance where Ginger's sleeve hit Fred in the face. From what I read he was pretty dazed by the impact. Small wonder, her beaded dress must have weighed a ton. "Let Yourself Go" is always a fun time. And, my personal favorite, "I'm Putting All My Eggs In One Basket" is so funny and cute - it's impossible to watch without smiling. 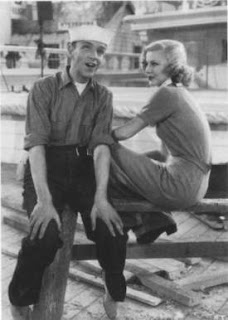 Have you seen Follow the Fleet? What are your favorite songs? Your favorite lines? Check my Facebook page for more pictures, video clips, and quotes!
Posted by Sally at 10:10 AM