So, I've been making little notes and ideas for blogging for months now. I was really excited about the prospect of getting back into it but kept thinking, "this will be an eventual thing" and "I want everything lined up and ready to go before I get start." There are still some post ideas that I'm saving for when they're ready... although as I write this, I'm thinking, "meh. I could do sneak peeks. Even I post about projects that I never finish, that's ok, right? We're all human." It might actually be even more encouraging to write posts about projects in the works, regardless of whether or not I finish them - I may discover that there are a lot of people just like me - with tons of unfinished projects on their desks. I find unfinished projects both exciting and discouraging. On the one hand, all of the possibilities! On the other hand, why can't I just finish?? So, you may see some in-the-works posts coming up. I'll ruminate and get back to you.

Anyway, as I was saying, I've been postulating over getting back int the blogosphere for a while now. But, what finally tipped me over the edge to say, "you know what? I'm just going to start!" was rewatching La La Land (2016).

I've heard a lot of mixed reviews of La La Land. Most people I talked to loved it. Several people hated it. This isn't actually going to be a full-fledged review of the movie, for several reasons...


What I'd like to do today is discuss one very specific moment in the movie and talk about classic movies that also use this styling and maybe throw in some compare/contrast.

Ah! I love blogging now! I can use gifs! It's so magical!

I will not pretend that I am the first person to discuss this scene but that doesn't mean I can't be the next person to do so. This was a pretty memorable part of the Epilogue sequence. It was featured in the trailers and it was beautifully filmed. Emma Stone and Ryan Gosling are outfitted in simple black and white outfits against a black backdrop with stars that reflected in the shiny floor - it looked like something right out of a classic movie. Well, after all, it was... 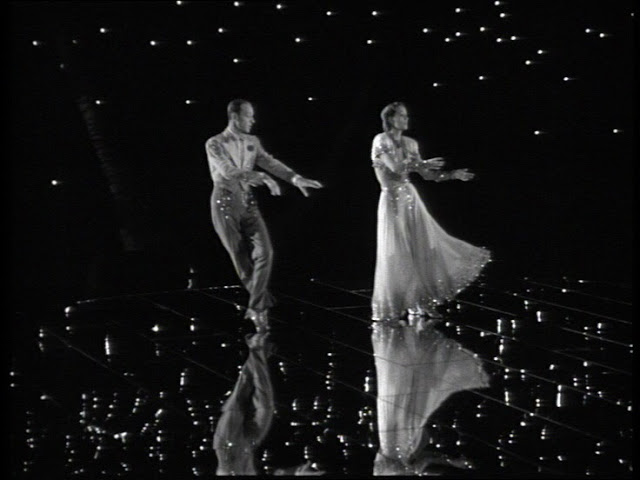 In Broadway Melody of 1940 (1940), Fred Astaire and Eleanor Powell famously danced to Cole Porter's "Begin the Beguine" in front of what is basically the same minimalistic but nonetheless magical background. As Frank Sinatra famously quipped in That's Entertainment (1974), "you know, you can wait around and hope but, I'll tell ya, you'll never see the likes of this again" (Okay, actually, he quipped that when talking about this scene, which is very similar but does not have the same romantic vibe as the one I'm going to discuss). Fred Astaire and Eleanor Powell were both unarguably masters of tap-dance. This wasn't amateur hour - this was a unique pairing of two of the greatest dancers of the day. This dance, in particular, in context of the movie, is basically the first time the two characters dance on equal footing. They dance together at other points throughout, but usually Fred Astaire's character is an ambitious hoofer, admiring the starlet Eleanor Powell portrays - or he is pretending to be someone else. In this scene, they are completely themselves and can be unapologetically perfect. I love this dance. Admittedly, it isn't my favorite Fred Astaire duet, but it's high up there. I love the simple elegance of the set up. I love that this is a true incarnation of Fred Astaire's famous quote, "either the camera will dance, or I will." There are no admiring audience members in the shot and very few views of the band in the background to distract the viewers from simply admiring the two dancers at the center of the screen. It was a beautiful sequence. I can't really blame the filmmakers of La La Land for emulating it.

But they weren't the first ones to do so. In 1952, MGM released Lovely to Look At, a remake of RKO's Roberta (1935). It's a cute musical, but there are parts of it I don't love - Red Skelton's slapstick, for one thing, and, for another, Howard Keel's portrayal of a character that is so unlikeable that I wonder why the girl is supposed to fall in love with him (yes, yes, he was extremely handsome and had a beautiful voice but, really? Come on, Kathryn Grayson, you could have done better). However, I really love Marge and Gower Champion in this movie. They are, really, my favorite part of it. I love Gower Champion's choreography style.

This movie was filmed in color so it is the most different of the three scenes I'm comparing here today. However, I think it is still worth mentioning. In one notable scene, the two characters dance in a little restaurant that fades away in a dusty blue backdrop filled with stars... sound a little familiar? 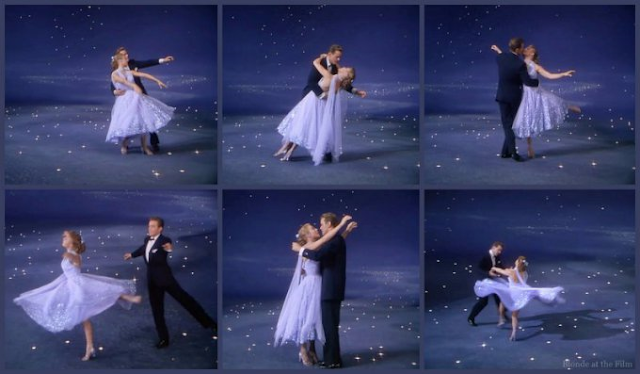 The scene is beautiful and romantic and set to the gorgeous Jerome Kern tune, "Smoke Gets In Your Eyes." Though filmed in color, I think it is notable that Marge Gower's dress is a similar tone to the backdrop, giving the whole scene an understated feel - the musicals of the 1950's, particularly MGM's were not known for being understated, which makes this sequence really stand out to me. (Confession: this scene is actually my favorite of the three I'm comparing here today.)

I was really excited about La La Land before I even knew what the movie was about. The posters all looked amazing and, when the trailers came out, there was dancing and singing and - well, I was just thrilled to pieces. And when I finally went to go see it, I think a part of me was hoping that this film would usher in a new era of musicals. Maybe, once again, we could have some dance scenes to gush over, dresses to replicate, and songs to learn. But, when I watched the movie (and every time I rewatch it), I was... underwhelmed. We are not, sadly, looking at MGM in the 1950's. Emma Stone and Ryan Gosling are good in their roles - highly enjoyable - but they are no Fred Astaire and Eleanor Powell, nor are they a new Marge and Gower Champion.

And yet, there is something uniquely enjoyable about that. I watch "Begin the Beguine" and "Smoke Gets In Your Eyes" and I yearn for something so romantic and polished. I want to be in a pretty dress and a beautiful setting, with a handsome and able dancer lifting me and twirling me to something by Gershwin or Porter or Kern... I'm not ruling out the possibility, but I'm aware that this is unlikely to happen. La La Land gives me something a little more attainable. It's not perfect; but, let's be honest, I'm no Eleanor Powell or Marge Champion either. I can't reasonably imagine myself in either of their places. But I can imagine myself dancing in a more ballroom style with someone.

This is why I love and don't love La La Land. It reminds me that life isn't actually like the movies. But it gives me something a little more tangible. That low-hanging fruit is both encouraging and discouraging and it's something I have to reprocess every time I watch the movie.

Whew! I sure got loquacious for my first post back. They won't all be like this. I guess I was saving up! What are your thoughts on these sequences? On La La Land or any of the other movies mentioned in this post?

SaveSave
Posted by Sally at 3:30 PM