He seems more like the champagne type to me.

I struggled for a while on what to cook for this week. As you have probably noticed, I'm trying to theme each week to a certain movie. The reason is that eventually, after this month, I can theme the blog to a certain movie or two each month. And then I'll have recipes and crafts and outfits for that particular movie. It's a little harder doing it each week but, again, this is kind of a test run. So, it's ok.

I kept gravitating toward champagne because there are several scenes that involve it. There's one where Rock Hudson's character prepares a bottle for when Gina Lollobrigida comes to his room and there's the morning after when he realizes she never came to his room and he spent the evening alone. The bottle cork winds up creating a plot twist that makes it even harder for Rock Hudson to spend alone time with Gina Lollobrigida. So, it seemed appropriate. 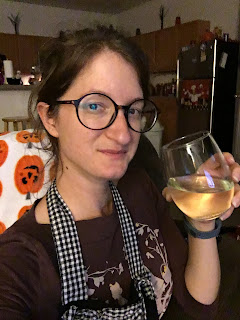 So, I discussed with my friend Kat what I should make and when I told her that I was debating doing something with champagne for my recipe for the Come September week, she suggested I make Champagne Cupcakes. Which is brilliant! But the thing is, my roommates don't really eat baked goods unless I stand there and hand it to them, so I can't count on them to eat them. And my office has been particularly health-conscious so I can't do the normal of thing of leaving them in the break room. And I know I'm not going to eat an entire batch of Champagne Cupcakes. So, it was a really clever idea but I wasn't entirely sold. And I kept looking on Pinterest until I found this recipe: Creamy Champagne Chicken. It's delicious and I highly recommend trying it out. I made mine with carrots and corn and mashed potatoes. 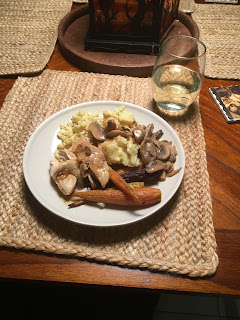