You know, when I couldn't push my bike up that last hill... he carried it for me. 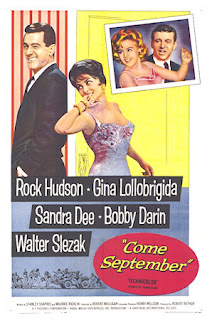 Summary: American tycoon, Robert Talbot (Rock Hudson) comes to Italy every September to romance his Italian girlfriend, Lisa Fellini, (Gina Lollobrigida) at his Italian villa. What he doesn't know is that Lisa is engaged to another man and Robert's majordomo, Maurice, (Walter Slezak) has turned the Italian villa into a hotel. When Robert makes an unseasonable trip in July, Lisa hurriedly drops her fiancé and Maurice scrambles to turn the hotel back into a villa... and explain to Robert the group of American teenagers who have booked rooms! 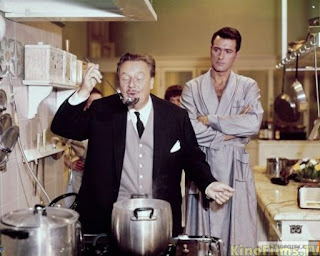 It's a hilarious movie featuring some fantastic dialogue, a dreamy Rock Hudson, a gorgeous and sassy Gina Lollobrigida (along with her divine costumes), Bobby Darin singing, an adorable Sandra Dee, and a young, Pre-Cabaret Joel Gray. This was Bobby Darin and Sandra Dee's first film together - in fact, they met while making it! 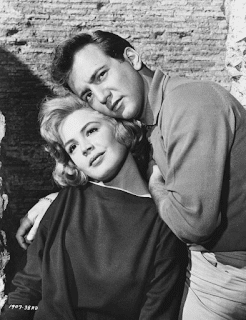 The movie enjoys some wacky plot twists and ends perfectly.

I will admit that there is a section of the movie that I don't love because there is a bit of the "virtue is a woman's best quality" school of thought. However, it is delivered in something of a tongue-in-cheek way and that opinion doesn't necessarily win the end of the movie (although that is kind of arguable). I forgive that little section (usually by fast-forwarding it) because I just love the rest of the movie so much. And the movie ends with the girl getting the guy instead of the guy winning the girl, which makes me feel a little better about the whole thing. And if that sort of ideology doesn't bother you, then you can disregard! 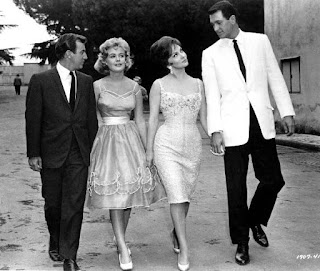 Has anyone else seen this movie? What did you think?
Posted by Sally at 8:58 PM